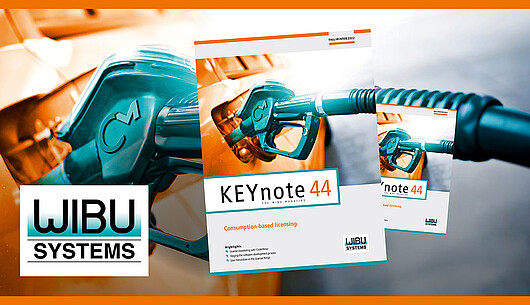 Issue 44 of the KEYnote bi-annual magazine from Wibu-Systems offers an insightful look at the business models, technological advancements, and breaking news in the world of software protection and licensing.

As the days grow shorter in the northern hemisphere, it is time to take stock of the stories and developments of the year. For loyal fans and users of CodeMeter, the protection, licensing, and security solution of Wibu-Systems, this naturally includes the new edition of the KEYnote magazine, published every six months by the IT security specialists from Karlsruhe with news from the field, stories from the company, and think pieces about the future direction of cybersecurity.

Alongside its many technology news stories and contributions from developers and practitioners, the 44th issue of the KEYnote magazine includes a very special look at an issue that has sparked a live debate among cybersecurity theorists and developers: The now very present quantum computing threat. Long acknowledged as a theoretical possibility since Peter Shor demonstrated the ability of quantum computers to break the mathematical underpinnings of established encryption algorithms, the advent of working and commercially available quantum computers implies that current encryptions no longer offer the virtually guaranteed security that they used to. Although technological limitations still leave some breathing space, the time to act for cybersecurity professionals is now, says Dr. Carmen Kempka, Wibu-Systems’ Corporate Technology Director, in her piece on “Racing the Quantum Hare”. Taking the story of a familiar German folktale as a model, her contribution outlines the nature of the threat and the current prevention and standardization efforts in the field to support Dr. Kempka’s call for quantum agility: a proactive response to the threat that does not give up on the established measures, but shores them up by putting in place additional, post-quantum-secure technologies and countermeasures.

Of more immediate relevance for regular users of CodeMeter, this KEYnote issue includes new options for using their favorite protection and licensing technology. The topics covered range from a close look at the capabilities of the License Portal, not least for establishing new sales channels via reseller integration, to the choice of hosting packages for staged software deployment via its license management mothership, CodeMeter License Central, and more specialized concerns like the option of using the fundamental must-have for encryption and license creation in the cloud, with Cloud FSB.

Practitioners will enjoy the issue’s featured article on consumption-based licenses as a sleek and simple means to build a new business model for their software products. With the ability to track usage effectively and accurately, consumption-based licenses are a powerful choice alongside conventional one-off purchases or regular subscriptions; all three licensing models represent different ways of conceptualizing the relationship with the client and finding the right balance between market demand and pricing policy and, together, they cover every possible scenario. This issue of the KEYnote magazine explores the issue further with a closer look at CodeMeter’s license monitoring capabilities, which represent the technical backbone for consumption-based licenses and other license engineering feats, like enforcing time limits or establishing clever and effective user management.

The fall/winter issue of the KEYnote magazine again offers the full range of reports and stories from the CodeMeter world, with many actionable insights for practitioners, interesting use cases, and other news from Wibu-Systems.